What I’m about to share with you are a particularly controversial female psychology tactic that any guy can use to quickly seduce a woman (and put her under his dominance and control).

I’ve received a lot of angry emails (from women!) for publishing this tactic. I can understand why people are pissed off with me. And once you finished reading this article, you’ll understand, too.

Let’s face it. Female psychology is not pretty.

In fact, sometimes it can be downright ugly. In today’s world of political correctness, nobody likes to talk about it, but guys get a lot of crap from women.

I’m just speaking the truth here. If some people are offended by this, then so be it.

If you’ve been in a relationship or two, you might have also realized this yourself. Love is not roses and rainbows all the time.

In fact, over time, most relationships will inevitably turn shitty.

As a result of this, lots of guys are driven to the point of severe depression and extreme desperation (and in some cases, suicidal).

I know this for a fact, because as a dating coach, guys come to me all the time to tell me their horror stories…

Indeed, on some days, I feel more like a psychologist than a dating coach!

Things just don’t have to be this way.

If you’re thinking that there must be a way out – well, you’re correct!

Discover the quickest way to make a woman fall in love with you using a little-known “mind hack” tactic. With Fractionation, you’ll have the ability to covertly plant ideas in a woman’s mind and influence her thoughts and behavior. Watch this Masterclass for free!

Remember: It’s Not Your Fault

You’re reading this article probably because you want some clarity over the mystery of how women psychology works.

And if your woman is driving you bonkers, first, I want you this –

It’s not your fault.

Every single woman in this world has got some amount of “crazy” built into her brain.

(It’s a fact validated by scientists and psychologists such as Sigmund Freud and Carl Jung.)

You can say that they are hard-wired inside their mind to go utterly nuts, once in a while. Strange, but true!

So what can a guy do to handle this, and keep sane?

Step 1: Accept women for the flaws that they have.

Accept the fact that female psychology is screwed up. Take that as part and parcel of the relationship.

You can choose to fight this fact of life and continue to struggle with women… or, you can choose to exploit these flaws to your advantage. Most would choose the latter, of course. 🙂

Step 2: Exploit the same flaw inside their psychology to your benefit.

This is where it becomes interesting, so pay attention!

While a woman may give you grief over her own psychological imperfections, you can play the same game… by exploiting the same flaws that’s inside her mind to your advantage.

With one specific female Mind Control technique (which I am going to share with you later in this article – keep reading), you can turn the tables on her and make her be compliant to you, obeying your wishes for a change.

Loophole In The Female Psychology You Should Ruthlessly Exploit

You should know that women are primarily driven by their emotions and not by rational thinking.

Therefore, don’t make the mistake of attempting to persuade a woman – such attempts are sure to fail. 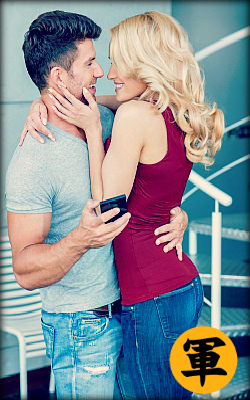 Conversely, in order to win a woman over and make her subservient to you, you have got to push her hot emotional buttons.

So how do you access those hot emotional emotions then?

Well, it turns out that there is a simple way to do this. There is a little-known “loophole” inside the female psychology which you can exploit in order to gain a “back door” to her mind.

First of all, some scientific theory on how this loophole works. (Bear with me… it’s important for you to understand this.)

A woman rejects a man’s advances through what psychologists call the “Critical Mind”.

This is the portion of her brain which is rational, cold and logical.

The “Critical Mind” is a built inside the women psychology to protect herself as a natural defense mechanism against the unwanted advances from men.

It then follows that in order to access a woman’s hot emotional buttons, you’ll need to completely bypass her “Critical Mind” – done covertly.

You can sneakily sidestep her “Critical Mind” by making a woman go through an emotional roller coaster with you (i.e. by getting her to experience both happy and sad feelings in your presence).

For now, all you need to know for now is this –

To control a woman and dominate her, you need to put her through an emotional roller coaster.

Next, you’ll discover a quick method to do all this, and more.

You’ll be amazed at how simple it is. Dig in!

The Simplest Way To Exploit The Female Psychology Loophole

The technique which you can use to put a woman through an emotional roller coaster is a Mind Control technique called Fractionation.

Known as the “grand daddy” of all hypnosis-based seduction tactics, Fractionation is known to be able to turn a feisty woman into a docile little pussy cat in 15 minutes or even less (if you do it correctly.)

Next, I’ll share with you an excellent resource which you can learn the Fractionation technique in full.

Inside the Masterclass (link below), you’ll learn exactly what to say and how to say it in order for it to work its magic.

Yet before you proceed, you’ll need to heed this warning:

One of the world’s foremost authorities on Fractionation is Derek Rake (also, the founder of Shogun Method), and he has got this to say:

“Using Fractionation to attract women is like bringing a gun to a fist fight.”

Indeed, it can be overkill in certain situations.

You see, to some guys, it’s unnecessary, especially if all they want is to get phone numbers over some casual encounter at the bar on a Saturday night.

In those circumstances, lightweight Pickup Artist (PUA) tricks are usually more than enough. There’s no need for heavy duty Mind Control seduction techniques like Fractionation (or something more advanced like the Black Rose Sequence.)

To others, Fractionation is easily the most powerful way for a guy to get what he truly desires out of a relationship: power, dominance and control.

That said, Fractionation will work wonders for you if you fit into any (or all!) of these descriptions below:

To learn how to use Fractionation in order to control and dominate women, watch this free Masterclass by clicking on this button below –

Whatever you do, keep this information for yourself, and do not share it with anyone else. You’ll understand why later!

PS: Using Fractionation indiscriminately on women may cause irreparable damage on the female psychology. We must ask you to use this technique responsibly, and without malice. Always leave women better than when you found them… that’s the only right thing to do!